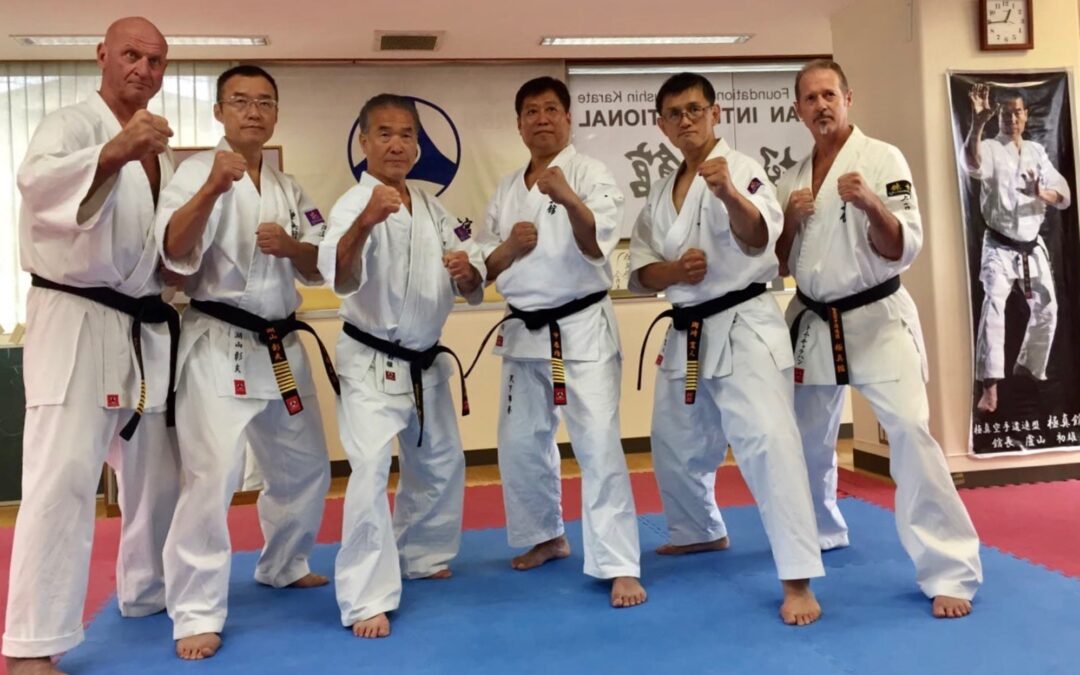 Here we are in 2019, a society obsessed with winning at all costs. When our individual values and self worth are based upon the mindset of winning and losing, we have missed the point of our training. One of the primary differences between traditional martial arts and other sports such as football, baseball or basketball is the latter were invented as a game and for entertainment purposes. Martial Arts began with the primary purpose of military protection and survival. The difference in a sporting event is the loser still gets to go home. In old school martial arts in the days of the Samurai, the loser dies. There is ONLY a winner.

So here we are turning an activity designed for life or death situations into a sport where techniques preventing DEATH are not allowed. There is a different mindset while training between the two.

My intent in this article is to distinguish the differences between Budo Karate VS Sport Karate and to enlighten the reader of the genesis and philosophy of the two. I want to stress however, this is only my opinion.

What is BUDO and how does it apply to Karate?

Budo is a philosophy of life that stresses “Perfection of Character” as the ultimate goal. It roughly translates to “ending conflict”. The anagram character is two swords crossed signifying the stopping of conflict. Developing the BUDO spirit can be attained through proper martial arts training, however, it is not all punching and kicking as many may think. Your “character” defines you by your compassion, empathy, and concern for others in the world. It is a philosophy that embraces and informs all aspects of your life, not only when you are training in the dojo. The Budo-Ka understands that the training is the catalyst for a way of life. These values should also be taught inside the dojo. Sadly, this education is lacking as the sporting aspect has evolved.

In the days of the Samurai, they trained with a specific intent, knowing that when they fight, it is life or death. The late 1880’s was the beginning of the Meiji Restoration period and the samurai were literally banned from practicing their deadly art. This was the beginning of BUDO. The Samurai who already lived by an informal code of ethics called Bushido, which included values such as honesty, courage, respect, self-sacrifice, self-control, compliance with duty, and loyalty, now applied these values to the art of “self improvement” (read: Character). They became pacifists after living near to death their entire lives. They studied Confucianism and Buddhism as well, giving them a spiritual awareness ( Mind Body Spirit). The Samurai adhered to the mentality of training hard with a life or death mindset, which kept them focused and present. They applied the same discipline to all endeavors. The Bushido code and self discipline was taken out of the dojo and applied into mainstream life. Simply stated, they led by example. Training in BUDO karate therefore is a way of life. As one strives for self improvement and perfection of character, we must also adhere to the Bushido code of ethics.

There are many organizations that now do “Competition / Extreme Karate” The events that look like they are doing gymnastics with elaborate flips and burning nunchakus, swords etc. Does one still have to practice hard with self discipline to be very good? Of course ! Is it BUDO Karate?… No, not in the traditional and historical sense. It is solely a competition for entertainment and a trophy. This is no different than playing any other sport. The purpose is to showcase ones skills and to be awarded a trophy. Back in the Samurai days your trophy was your life. Again, a different mindset.

In true Budo there is no external enemy or opponent. True Budo is to become one with the universe, not train to become powerful or to throw down some opponent. Rather we train in hopes of being of some use, however small our role may be, in the task of bringing peace to mankind around the world.
Morihei Ueshiba

Because a Budo-ka is unlikely to have to fight for his life, why train with the intensity of life or death? You must train with 100% focus to gain the most from your training as if your life depends on it (It may someday). Why the paradox of violence and peace? You train for potential violence yet understand the dangers of having this ability, thus fostering peace. Who is the opponent? The opponent is YOU, and the struggle is internal. Overcoming your internal demons and the desire for self improvement is the constant battle. THIS, is the essence of BUDO…. You are your #1 “enemy”. In BUDO we strive to overcome these internal conflicts through the rigorous training. One should be mindful of the Bushido code and then begin to realize who we truly are, as we continue to improve ourselves daily. An example of a karate style that embodies BUDO, is Kyokushin. Kyokushin means The Ultimate Truth. The Ultimate Truth is knowing yourself.

A quote from Mas Oyama, considered one of the greatest martial artists of all time:
“Karate that has discarded Budo has no substance. It is nothing more than a barbaric method of fighting or a promotional tool for the purpose of profit. No matter how popular it becomes, it is meaningless.”

In addition to the competition and extreme karate, “point karate” is also sport and not BUDO, but for me, more closely related. Some individuals of these styles may in fact practice BUDO, but it is not inherent or required for the sport, and from what I have seen inside and outside their dojo’s most are not aware of this concept and philosophy.

Scoring a “point” on an opponent without actually damaging him/her is pure sport. Again, this is about scoring points in an imagined conflict, inflicting imagined damage to WIN a competition. Are these competitors interested in the deeper meaning of the training, the history of the Samurai, or indeed interested in anything beyond winning a trophy? Perhaps. Is perfection of character the primary purpose of their training?Perhaps. If not, they are not training in a BUDO art, which is in fact the essence of martial arts and what I am attempting to distinguish in this article.

Budo Karate is a mindset. It is a lifelong journey that includes a philosophy of life coupled with one’s character development. When training in a BUDO dojo, observing proper etiquette is also paramount. How a student bows, the strict adherence to the Senpai/Kohai (Senior/Junior) relationship, and the way in which one speaks and comports his/herself, and many other rules of conduct contribute to this art. Of course, there can be and is a sporting aspect to even BUDO karate, but the reasons for competitions are different. Indeed when a Budo-Ka earns a victory there is humility and respect that accompanies it, with no demonstrative elation, thus acknowledging and respecting one’s opponent. In the Samurai days there was no joy in winning. The goal is simply not to lose. In BUDO karate one doesn’t train FOR competitions as a primary objective. In the sporting world, this is their goal and their primary objective. Their practice is focused on the next tournament. In my observations in the sport world, there doesn’t seem to be a depth to the technique, in terms of knowledge and bunkai (application). It merely works for the specific event, and designed to score a point. If there is NO full contact as in BUDO Karate, how does one even know whether or not the technique truly works? The judges and referees are guessing that the strike would injure the opponent. The premise of it being called Karate (other martial arts as well) is a misnomer given its genesis. More importantly, as stated above, if the sole purpose of training is to win a competition, then it is not in line with idea of BUDO, which is always full contact. and

This article is not intended to disparage NON Budo training. It is to enlighten and to distinguish between BUDO Karate and sport/extreme competition karate, as much of karate today has devolved from a serious art form that is full contact, that places one’s character above all else, to a sport for entertainment value, and arguably driven by ego. One can certainly have the BUDO spirit and be a sport /competition karate practitioner, but sadly in today’s day and age the competition has become the motivation for the practitioner and it has become wildly popular. To me, they are missing the most important and elemental precepts of martial arts.

These are only my opinions being expressed as this topic has come up many times in recent martial arts conversations.

Thank you for reading.